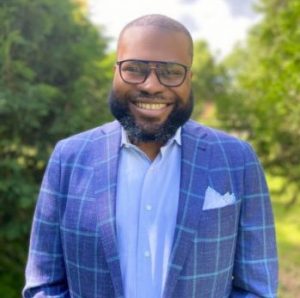 Crossing the Color Line: A History of Passing

The Roaring Twenties and the Rough Thirties (not offered 2022/23)

Tyran Steward is a historian of African-American and Modern U.S. History. His research examines political, labor, and social history as well as popular culture and sport. His courses emphasize many of the same themes, primarily focusing on labor and race politics in the North especially during the early twentieth century and the American Interwar Period.

Steward’s book, The Benching of Willis Ward: The Making of a Black Conservative in the Jim Crow North (forthcoming), is the first scholarly examination of Willis Ward, an African-American football pioneer at the University of Michigan and the teammate of future U.S. President Gerald Ford. The book uses Ward’s racist benching in 1934 to trace the development of black conservatism and northern Jim Crow in their emergences in sport and in their fundamental relationship to the workings of formal politics and racial liberalism. The critical intervention here is that this study brings the relatively unexplored world of sport into focus, demonstrating how in the fine grain, materiality of everyday life or even recreation, fascinating sites of racial hierarchy, political reimagining, social retrenchment, and struggle existed.

Prior to coming to Williams, Steward was a Mellon postdoctoral fellow at Carleton College and taught previously at the University of Michigan. He completed a Ph.D. in History at Ohio State University and a B.A. at Morehouse College.

The Benching of Willis Ward: The Making of a Black Conservative in the Jim Crow North (forthcoming)

“‘At the University but Not of the University’: The Benching of Willis Ward and the Rise of Northern Racial Liberalism,” American Studies Journal Vol. 55 No. 3 (July 2016). Article in special issue on “Sports in the University” (Guest-edited by Noah Cohan, Daniel Gilbert, David Leonard, Theresa Runstedtler, Tyran Steward, and Lucia Trimbur)

Review of May We Forever Stand: A History of the Black National Anthem, by Imani Perry (Chapel Hill: University of North Carolina press, 2018), in Journal of African American History (Summer 2019)

Review of In Search of the Talented Tenth: Howard University Public Intellectuals and the Dilemmas of Race, 1926-1970, by Zachery R. Williams, (Columbia: University of Missouri Press, 2009), in North Carolina Historical Review Vol. 88, No. 4 (October 2011)

“A Peculiar Kinship,” Williams Magazine, May 2021

“The Unfinished Struggle: Civil Rights in the 50th Anniversary of the March on Washington,” Origins: Current Events in Historical Perspective, August 2013