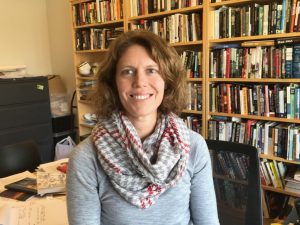 The Age of McCarthy: American Life in the Shadow of the Cold War (not offered 2021/22)

For the Soul of Mankind: The Cold War and American Foreign Relations

Jessica Chapman’s specialization is the United States and the World, with research emphases on Vietnam, decolonization, and the Cold War. Her teaching interests include U.S. foreign relations, the Vietnam Wars, the Cold War and decolonization, sport and diplomacy, and the relationship between foreign policy and domestic affairs. Her first book, Cauldron of Resistance: Ngo Dinh Diem, The United States, and 1950s Southern Vietnam was published by Cornell University Press in 2013. She is currently at work on two book projects. The first, Shaken to Pieces: Decolonization, the Cold War, and Remaking the World, is under contract with the University Press of Kentucky. The second, currently supported by a Mellon New Directions Fellowship, is an international history of Kenyan runners. That project unpacks the layered significance of Kenya’s running industry at the local, national, and international levels in order to shed light on the new international system that began to take shape in the late-1960s. It illuminates new modes of economic, cultural, and political exchange between decolonized peoples and the industrialized West and explores the effects of those exchanges on postcolonial participants and societies, particularly in Kenya’s running hotbeds of Eldoret and Iten.

Shaken to Pieces: Decolonization, the Cold War, and Remaking the World (University Press of Kentucky, under contract)

“‘We Have Seen the Enemy and He is Us’: Hollywood, the Cold War, and Battling the Enemy Within” in Material Culture, Silver Screen: War Movies and the Construction of American Identity, Matthew C. Hulbert and Matthew E. Stanley, eds. (Baton Rouge: LSU Press, 2020)

“The United States, the Vietnam War, and Its Consequences” in The SHAFR Guide: An Annotated Bibliography of U.S. Foreign Relations Since 1600 (2017)

“Vietnam and the Global Cold War” in The Routledge International Handbook of the Cold War, Artemy Kalinovski and Craig Daigle, eds. (2014)

Alexandra Gudaitis ’19 – “An Act of Honor”: Revisiting the GI and Vietnam Veterans Against the War Movements

Reed Jenkins ’19 – An American Surgeon, The Spanish Civil War, and the Faultlines of American Politics
(with Soledad Fox)

Zach Miller ’10 – ‘Take Communism Away from the Communists’: The Early Intellectual Crucible of Walt Whitman Rostow and the States of Economic Growth