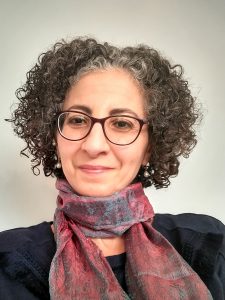 History of Islam and the Middle East since 1453

Food in the Middle East: A History

Febe Armanios is visiting from Middlebury College, where she is Professor of History and co-Director of the Axinn Center for the Humanities. She specializes in the history of Christian communities in the Middle East (especially Egypt’s Copts), Muslim-Christian relations, as well as food history and media studies. She is also a specialist in the history of non-Muslim communities within the Ottoman Empire, particularly in the early modern period. In recent years, she has conducted archival and oral history research in Egypt, Turkey, Cyprus, Lebanon, as well as various parts of Europe and the United States. She has been awarded fellowships from the Fulbright Foundation, the Gerda Henkel Foundation, the John Templeton Foundation, and the National Endowment for the Humanities, among others. In 2015, she was a Visiting Fellow at Harvard Law School (ILSP). And in 2020-21, she was a Luce-American Council of Learned Societies (ACLS) Fellow in Religion, Journalism, and International Affairs and a Fordham University Fellow in Coptic Orthodox Studies, both awarded for completing a book-length project titled Satellite Ministries: The Rise of Christian Television in the Middle East. She has simultaneously begun research for another book project, which examines the comparative history of Christian food practices in the Eastern Mediterranean and Southern Europe.

Halal Food: A History, co-authored with Boğaç Ergene (Oxford University Press, 2018; paperback 2020) -Winner of the Best Book Award 2019 by the Association for the Study of Food and Society

“A Christian Public Space in Egypt: Historical and Contemporary Reflections,” in Katsumi Fukasawa, Benjamin J. Kaplan, Pierre-Yves Beaurepaire, eds. Religious Interactions in Europe and the Mediterranean World Coexistence and Dialogue from the 12th to the 20th Centuries (London: Routledge, 2017), 317-330.

“Coptic Faith and Practice in Egyptian Contexts,” in Elizabeth W. Fernea, Farhad Daftary, and Azim Nanji, eds. Living in Historic Cairo: Past and Present in an Islamic City (London and Seattle: The Institute of Ismaili Studies and the University of Washington Press, 2010), 86-92.