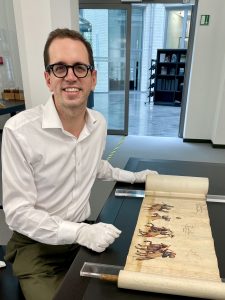 The Coffeehouse from Arabia to the Enlightenment

Approaching the Past: The Historian's Task

European Intellectual History from Aquinas to Kant (not offered 2022/23)

Alexander Bevilacqua, Assistant Professor of History, studies early modern Europe (ca. 1450 to 1800). He offers courses on the history of Europe from Renaissance to Enlightenment, focusing in particular on European expansion across the globe and its cultural and intellectual ramifications.

Bevilacqua is the author of The Republic of Arabic Letters: Islam and the European Enlightenment (2018; paperback 2020). He also co-edited Thinking in the Past Tense: Eight Conversations (2019). His current book project, Europe Triumphant: Nobility and Race in the First Global Era, investigates early racial performances at European princely courts.

His articles have appeared in History of European Ideas, Journal of Qur’anic Studies, Journal of Modern History, Journal of the Warburg and Courtauld Institutes, and Past and Present. He was educated at Harvard College, the University of Cambridge, and Princeton University, from which he received his doctorate in 2014. From 2014 until 2017 he was a junior fellow in the Harvard Society of Fellows.

Bevilacqua’s research has been supported by the American Council of Learned Societies, the American Historical Association, the American Philosophical Society, the American Society for Eighteenth-Century Studies, the Centre for History and Economics at the University of Cambridge, the Folger Institute, the Renaissance Society of America, and the Society for French Historical Studies. He has held fellowships at the Huntington Library, the Kluge Center at the Library of Congress, the Rare Book School at the University of Virginia, the Warburg Institute, and the Wissenschaftskolleg in Berlin. In 2023 he will be a fellow at the Herzog August Bibliothek in Wolfenbüttel.

“A Dragoman and a Scholar: French Knowledge-Making in the Mediterranean from Old Regime to Bonaparte,” Journal of Modern History 94 (2022): 247–287.

“‘Away With All the Greeks:’ Ancients, Moderns and Arabs in Étienne Fourmont’s ‘Oratio de Lingua Arabica’ (1715)’” in Jill Kraye and Jan Loop, eds., Scholarship Between Europe and the Levant: Essays in Honour of Alastair Hamilton. Leiden, Brill, 2020.

“How to Organise the Orient: D’Herbelot and the Bibliothèque Orientale.” Journal of the Warburg and Courtauld Institutes 79 (2016): 213–261.

“Conceiving the Republic of Mankind: The Political Thought of Anacharsis Cloots.” History of European Ideas 38 (2012): 550–569.

“The empathetic humanities have much to teach our adversarial culture,” in Aeon, 15 January 2019.

Ben Weinstein ’22 – The World of a Company Scholar: Tracing “Connections” in India in the Late Eighteenth Century.

William Abersek ’21 – “All that perchance shall e’er be known:” William Hunter’s Eighteenth-Century Collection of Medieval Manuscripts. Winner of the Robert C. L. Scott Prize for the best thesis in U.S. or European History.

Hannah Tager ’20 – Little Fools and Visionaries: Converso Children on Trial During the Spanish Inquisition. Winner of the Robert C. L. Scott Prize for the best thesis in U.S. or European History.

Kevin Silverman ’20 – “The Truth, Always the Truth and Nothing More Than the Truth”: Reimagining Spanish History After the Disaster of 1898.

Rebecca Van Pamel ’19 – “The End is Near, the Turks are Here”: Instrumentalized History and the Politics of Siege Commemoration in 1883 Vienna. Winner of the Robert C. L. Scott Prize for the best thesis in U.S. or European History.